Home / Blog > Industrial Model: Give your Business an Upper Hand! 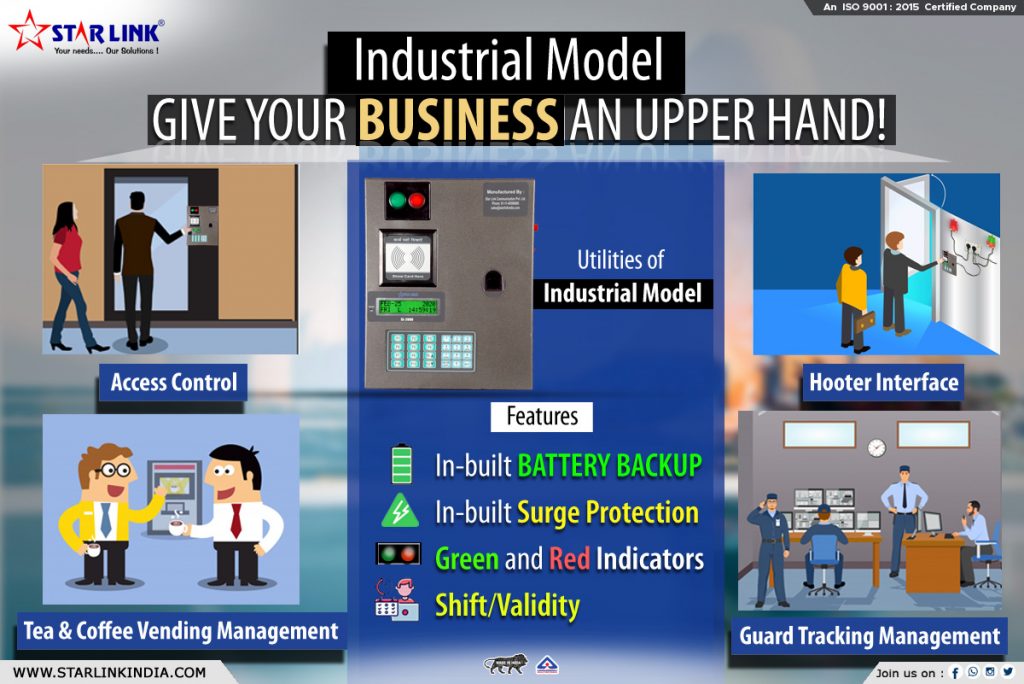 Industrial Model: Give your Business an Upper Hand!

This device will assist you in growing your business by allowing you to easily and accurately control attendance, access, and much more. We’ll discuss its pivotal role in your company’s success in this article.

What is Industrial Model?

The Industrial Model is an attendance device devised by a renowned leader in the manufacturing industry of biometric access control and attendance systems. It is designed especially to serve the big set-ups as in manufacturing companies, construction sites, factories, etc. – with a huge workforce.

The manufacturer has put itself in the shoes of other manufacturing companies. They know exactly what these companies require to maintain the safest, contactless, and time-saving attendance without having to face a substantial loss. And ‘cruciality’ of the Industrial model is in its robustness, quickness, and contactless feature.

The Industrial Model is the industrial version of the Classic Model built by the same manufacturer, unlike the classic model this machine can handle the dusty environment and manage attendance much faster than any attendance machine.

Let’s scratch the surface and talk about its properties before we get into how it operates. The industrial model contains several characteristics, but we’ll focus on the most important ones so you can get a sense of its quality. Read on!

A lot of companies complain that the attendance machines they use in their premises have one major flaw – they stop working when the primary source of power is not available. Which is the reason why Industrial Model was created to serve you even when there’s a power cut. The device has an in-built battery that will last for up to 28 hours.

There are some instances when there is a sudden power surge due to with machine getting damaged. To solve this issue Industrial Model is designed with an in-built ‘surge protection’ It defends the device against the harm that might be caused by unexpected power surges.

Industrial Model has two large indicators – red & green i.e. the red one is for entry denied and the green is for accepted. This feature assures that attendance has been marked or denied on the spot.

You can upload a list of employee shifts and define validity in the Industrial Model so that employees who do not arrive at the office within that time limit are refused entrance to the premises.

But did you know that Industrial Model can be used for various purposes other than attendance? Yes, the model not only serves the construction or manufacturing industries but this machine can be used for multi-purposes. Let’s see what those utilities are!

Access Control – The access control system can be formed using an access device, a controller, and locks. Industrial Model can be used as an access device for its successful operation. The best thing about this model is that it generates the in and out report to maintain the entry and exit records.

Hooter Interface – The hooter interface connects to an alarm or hooter that may be set up using Biometric Devices for attendance. It’s a serial port interface that connects to the Industrial Model, enabling this attendance machine to work as an alarm that notifies the workers at the factories whenever it’s their break time, lunchtime, or time to leave the premises.

Guard Tracking Management – Guard tracking can be done using the Industrial Model. These models can be installed at checkpoints throughout the company’s perimeter, where guards will have to display their cards before those machines at predetermined intervals.

Moreover, it creates a report after each transaction performed on each machine. The smart card is the best alternative for contactless access control systems and you can easily utilize it.

Tea & Coffee Vending Management – Vending machines are put in various firms to offer coffee or tea to their employees, however, they fail to keep track of how much coffee or tea is consumed.

But do you know, with the Industrial Model you can limit the usage of Tea and coffee vending machines? Definitely! The industrial Canteen Management Software Model is your all-in-one biometric solution. You can also have the machine customized according to your company’s requirements by the device’s maker.