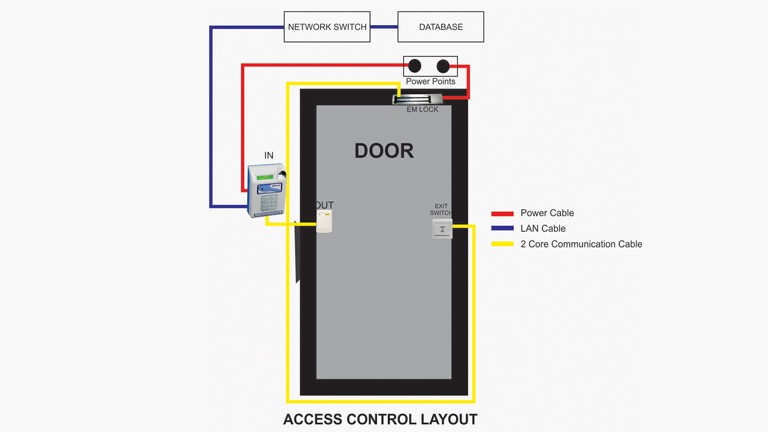 Access Control systems are mechanically and/or electronically controlled security systems programmed to let gates and barriers allow or deny access to users, under a predetermined set of rules. This set of guidelines could include who can be given access by the system, when can access be given, where can access be allowed and other such rules.

Access Control systems are discriminating systems, allowing or barring users based on pre-set rules. Basically, access control systems are logic gates where an input is passed to a controller or processor, which processes the input then return two possible outcomes to an output device.

A certain type of input is required when requesting access through a barrier. This can be a simple as a person pushing against a gate or inserting keys and turning a lock, or other forms of gaining access such as dropping tokens in a turnstile, inserting a magnetic ticket, or swiping an RFID card. Some control systems require a biometric reader, a combination of two or more methods. Many other methods that allow the security system to discriminate input are also used, such as voice analysis, security PIN, etc..

The Processing unit of the system analyses the input, and then checks this against pre-set rules or access privileges. It determines what type of access should be given to the request (such as level of security, parts of the secured facility that can be access, duration of access, etc.). After a YES/NO decision the controller then passes its logic to the output systems.

The output part of the system enforces the decision of the controller – to allow access or not. An output could be an opening of a lock, rotating of a turnstile, the removal of a barrier or it could also be the closing down of a gate, ringing of alarms, etc.

Turnstiles – usually consists of a tripod of rotating horizontal steel arms; they range from mechanical turnstiles all the way to mechanisms that open only with a coin, magnetic ticket, RFID card etc.. A variation is the optical turnstile which has an infrared barrier that sets off an alarm when breached.

Gates – consists if a metal or glass barrier, which is often motorised to retract or to deploy depending on the authorization trigger. Variations include access control gates that operate in much the same way as turnstiles, up to high speed gates with optical detectors that deter trailgaters.